Matej Klucho from the Czech Republic prepared the following recap of the Eurolanche Invasion IV. It was his second participation in the events…

I had already taken one trip to Denver in 2009, and all I can say is that my second appearance in Denver was still very surreal. After a little complication in my journey to the Budapest airport in Hungary (we went to the wrong terminal), we finally arrived in Denver. Our terminal was 5 miles away, and we had to walk almost the entire distance between them. Later, we flew via Munich, Germany to Washington DC. We had only one hour left before taking our final plane to Denver, so we were in a hurry and running at the airport in the capital of the USA - kind of like in the first ‘Home Alone’ movie.

During our fist day in Denver we experienced a rare and interesting moment - we met the general manager, Greg Sherman in front of the team store and got to take a photo with him. The first game we went to, the Colorado Avalanche played the Washington Capitals and won 2-1. Besides usual post-game meetings with players and getting tons of autographs and photos, there was one very special moment. The arena staff for the intermission contests chose me. I got to suit up in Peter Budaj´s old equipment, and then I had to face Bernie the mascot´s shots. I allowed only one of them in. I will never forget the feeling of entering the ice and preparing to make some saves.

It is very hard to describe all the unbelievable moments of the fourth Invasion, because I could write a book about them! I will never forget the NFL game that I visited for the first time. It was one big show. If you haven´t experienced it, you wouldn’t understand it. The Denver Broncos welcomed the New England Patriots and I shared so much excitement with 80 thousand fans. It was the middle of December, and I was wearing only a short-sleeve t-shirt. Denver is amazing place; the sky is almost always sunny - but when it’s cold, it is freezing.

The Author of this story is Matej Klucho, who is pictured with Milan Hejduk.

After the next game against the Tampa Bay Lightning, Jan Hejda showed us their locker-room. Hejda has since become our true friend, which was underlined by the private lunch that we had together after a practice one day. He wasn´t like any typical professional, his behavior was like we have already been long time friends. Finally, Colorado won five of six Eurolanche Invasion IV games.

I can´t forget the relationship I had with the other guys and friends, they were amazing. When we organized the first two Invasions years ago, we were just, “some Europeans who came to watch hockey”. During the fourth Invasion we had become, “some Europeans from Eurolanche”. Not only local fans, but also others had started to get to know us better. We became (what I felt) as celebrities at the games. It was very nice feeling to be known by fans, journalists, and Avalanche staff members. 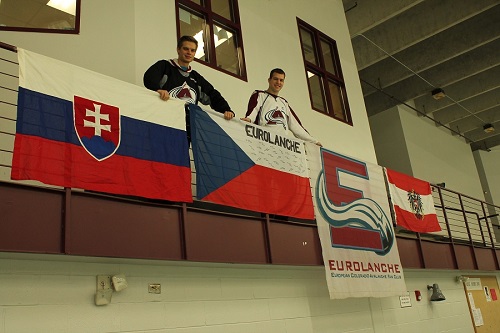 At the end, I can say it was the most interesting time in my life. Even two years later, I remember almost everything from this trip - and once again, you read only a very small part of what we got the opportunity to experience.

Back in time: Eurolanche Invasion III