It's been a busy few days for Petr Kvaca. He still can’t believe it. Would you, if you were in his place? Kvaca's first year of draft eligibility was two years ago, yet nobody drafted him. The same scenario unfolded a year after. And then, the 2017 NHL Entry Draft happened. The Colorado Avalanche chose Kvaca in the fourth round, 114th overall place. Eurolanche talked with Kvaca just 5 minutes after he learned that he was drafted from his agent. He was still shocked and really excited (he got the call at his friend’s wedding.). Moments later, he was invited to the Avalanche's development camp and found himself on a plane to Denver. He wouldn’t believe anyone who would have predicted anything like this.

Kvaca has spent the vast majority of his youth and junior career playing in the system of Ceske Budejovice in the Czech Republic and also appeared in several games at the international level, suiting up for the Czech U19, U18 and U17 teams. The past season was a breakout year for him, as he took over the starter duties in the playoffs and battled for his team's promotion from the Czech second-tier league to the Extraliga. Following a number of incredibly tough and close games, Kvaca and his teammates ultimately failed to earn a promotion. Despite this, Kvaca was the team’s best player, which is probably what attracted the attention of Avalanche scouts. It's worth noting that former NHL goalie Roman Turek is Budejovice’s president and Kvaca’s mentor.

What was your first reaction on being drafted by the Avs?

I almost cried, because I didn’t expect this. I am very grateful. It was an unforgettable feeling when my agent called me. There are no words to describe it. I have to keep working. It has given me a new impulse to work even harder. We will see what happens next. I am really, really happy.

You really didn’t expect it?

I talked with some scouts (during the season), but I didn’t believe in it too much.

Were Avalanche scouts among them?

Yes, I talked with them, too. I really don’t know what I should said about [being drafted].

Who invited you to the development camp?

[Avalanche pro-scout] Miro Zalesak called me and informed about the up-coming camp and that I should expect more calls.

What are your expectations from the camp?

It will be my first experience with a camp overseas. I am looking forward to show my skills, but at the same time, I have lot of respect, too. I think it will be a great experience and I will do anything in order to play here.

Do you know the history of the Avalanche?

I remember some things thanks to some of my friends who are Avs fans. I know about the likes of Sakic, Forsberg and Roy. I know Milan Hejduk played here for long time and that Martin Skoula also played here 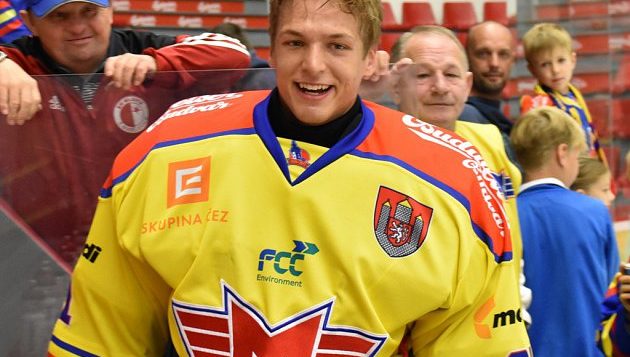 What did you learn from Roman Turek?

He helped me a lot in the playoffs. He is a really experienced goaltender. We have two [goalie] coaches in my Czech team, so we could work and improve several things. The current goaltending style is different from when he played in the NHL, but he always helps me with the mental aspect of the game.

How was your one-month experience in Canada during the past season and what did you do there?

I played at a U19 national tournament for the Czech U19 team, following which I joined up with the U20 squad for the World Juniors as the team's third goalie. It was a great time. It was my first time in Canada. I trained a lot. It was a good experience, which motivated me to work even harder.

Who was your favorite goalie while growing up?

I watched Henrik Lundqvist a lot and many other goalies as well.

Trip to Switzerland, meeting with Abby