A.J. Greer was selected in the second round, 39th overall by the Colorado Avalanche in the 2015 NHL Entry Draft. He already made his NHL debut this season, when he appeared in five games, making a positive impression. He had one assist and performed on both offense and defense. It is likely that he will come back to Denver this year for more NHL games.

After successful years playing midget hockey in Canada, AJ moved to the USA for his junior career, throughout which he played in three different leagues, most importantly in the NCAA at Boston University. He became the youngest forward to make his debut in the NCAA in 2014, when he was only 17 years old. Last year, during mid-season, he opted to leave Boston for his native province of Quebec, where he spent the rest of the season. In total, he scored 16 goals in 33 regular season games and 22 points in 20 post-season games for the Rouyn-Noranda Huskies of the QMJHL, as they won the QMJHL Championship and lost in the Memorial Cup final.

It is obvious that his decision to leave for the QMJHL was the right move, as he had the most successful season of his young career. After the season, he signed an entry-level contract with the Avs and started the season playing for their AHL affiliate the San Antonio Rampage. Before his first NHL call-up, he was the leading scorer among AHL rookies (15 points in 22 games as of today).

To be honest, a year ago, not many Colorado Avalanche fans knew about you. Today, after only a few months, almost every Avalanche fan knows about you and most of them even want to see you in the NHL as soon as possible. Can you describe what you did in the last few months and how you can make the transition to the NHL?

I’ve put in a lot of hard work during the last few months. I’ve spent a month in Colorado working with Avalanche strength & conditioning coach Casey Bond and I think that it helped me a lot. I’ve learned what guys in the NHL work on, what specific exercises they do. That prepared me for camp as well. After that month, I’ve spent a month and a half in Toronto working with ETS (Elite Training Systems). Our skating coach in Colorado Tracy Tutton works there, too, so I worked with her two times a week. After that, I’ve been on the ice three times a week, doing skill sessions with guys like Corey Perry, Nazem Kadri and John Tavares. It was really a special summer for me. It was hard work, but it paid off as well. I was really impressed with how much I’ve transitioned from the juniors and college to the pro game. I think it really suits my gritty, power forward-like style. I think the transition to the NHL just has to come with time. I’ve got a chance. I was really happy with the opportunity they gave me. I can just work my hardest and do what I do best to get up there as quickly as possible.

Realistically, did you expect such an early re-call in the first few weeks of the season? How did you find out you were re-called and what were your feelings at first?

It was a great feeling, that’s for sure. Getting to know that you’re going to play your first NHL game is incredible. It was a dream come true. It was a surreal moment. Honestly, before the season, I didn’t expect to be called up so early, but as the season went on, I felt that I had something special to offer to the Rampage and the Avalanche. I just worked hard and did my best, so they gave me an opportunity and I’m grateful for that. I found out that I’ve been called up while we were in Stockton. Duchene and Landeskog were out, so we had a team meeting instead of a morning skate on Saturday. The coach announced that someone’s going to go up, but he wasn’t sure who. Ten minutes later, while I was stretching, our athletic trainer told me to go into the office, where I talked to our coach and where he told me. I got to share the experience with my parents in Colorado, it was a really special moment.

What was your first shift for the Avalanche like and how did it make you feel?

It was unbelievable. I think even the warmups gave me chills. It was a great feeling. Not much happened during my first shift, I needed to get a feel for the game and for my line-mates. I think I did pretty well against the Bruins. After that, I got to play four more games. Overall, I thought I did really well. 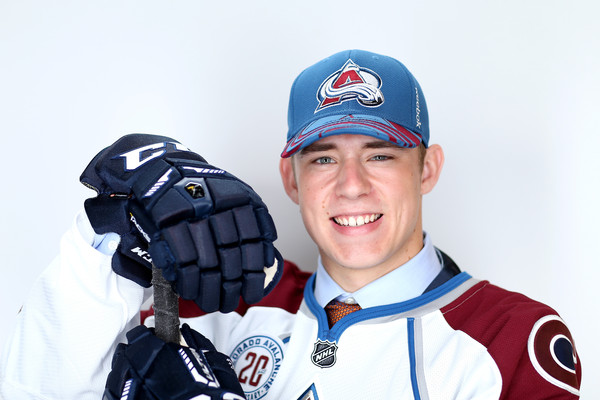 Your parents made it on TV and their reactions to your play have become famous. What did they tell you about your first game?

They were really proud of me, proud of my work ethic and of what I’ve accomplished during the last year. There were a lot of changes – going from college to the juniors, making that big decision to leave a team for my own good and for the good of my career. It was a tough choice, but I had to work through it and do my best.

What about the games you played after your debut? Is there anything specific that you remember from those games?

Just being around one of the best guys in the NHL, whether it’s Iginla, MacKinnon, Duchene or Tyson Barrie. Even the opposing players – I got to play against McDavid, Sam Gagner and guys like Jason Pominville, who I grew up watching. Being on the ice with big names like that was really special for me. It’s something I’ll never forget.

Was there someone on the Avalanche, who was your mentor while you were up there?

I think everyone welcomed me really well – from the coaching, to the staff and to the players. They took me under their wing and they would tell me if I did something wrong.

What do you think is the biggest difference between the NHL and the AHL?

I think it’s poise with the puck. Honestly, there’s more time with the puck in the NHL. It’s so weird to say, but the game is more structured. You have the world’s top guys playing against you and with you and they make even more plays. I think the AHL is a really good league, but it’s a little more bash-and-dash hockey, hitting and grinding. It’s more offensive in the NHL, but you need to be responsible defensively.

There were a lot of changes in both the Rampage and the Avalanche organization during the summer and with you being a rookie, how was your transition to professional hockey? Was is difficult to get to know all the different players on and off the ice? 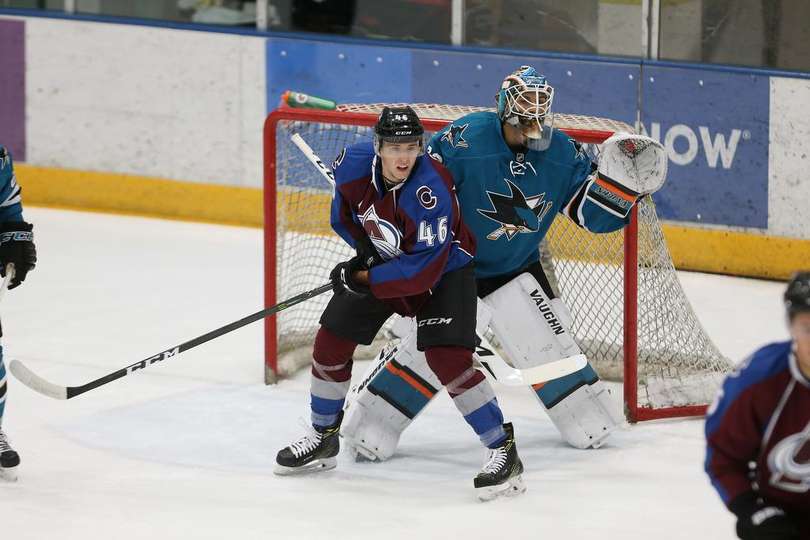 What are some of the players on the Rampage that you probably have the most chemistry with?

I think Rocco (Grimaldi) and JT (Compher) are the guys I have the most chemistry with, but you get put into different situations in different games, so you have to find that chemistry every game, whether it’s with them or with other players. Finding that chemistry faster than others is really a good attribute to have as a player.

You went on to play both college and junior hockey. Can you describe what it was like? What is your advice to younger players that are going through the same transition?

I was lucky to experience both, that’s for sure. I’m not mad that I went to college. Both experiences gave me a lot of experience, whether it was going to the National Championship in the NCAA and then going to the Memorial Cup with the Huskies last year, and made me more mature. Both experiences gave me different attributes to my game and to me as a person in order to succeed in life. I’m really thankful for having both those opportunities. College obviously didn’t work out as well as I thought it would, so I went to the juniors, which helped me a lot. I did the most I could in the situations I was put in. Now I’m here, so it obviously paid off. As for advice for young players, just keep working hard, even if it’s not going well, even if your coach isn’t putting you in the right situations or your game isn’t as good as you want it to be. Just keep working hard. Good things will happen to good people and that’s what kept me motivated. I knew I had a good work ethic and I knew that I wasn’t going to let people tell me “Oh, you’re leaving college, you’re not good enough”. Most people told me I couldn’t do much after leaving college, so I just tried to prove them wrong. Work ethic is something that coaches always look for, so keep working hard and the success will come.

Questions by David Puchovsky; transcription by Michal Hezely, both from Slovakia

Source of the photos: ColoradoAvalanche.com

Interview and meeting with Reinprecht