Eurolanche interviewed one of the top-ranked prospects of the upcoming 2017 NHL Entry Draft.

Nico Hischier is considered the top-ranked European player of this year's draft class. According to several pre-draft rankings, including the NHL Central Scouting ranking, Nico won't be drafted lower than 2nd overall. Only Nolan Patrick is ranked higher. However, several other rankings rank Nico above Patrick. Following the worst season in their history, the Colorado Avalanche have the highest chance to select first at the upcoming NHL Entry Draft in June. Everything will be clear in two weeks, when the NHL Lottery will decide the draft positions of the 14 teams that didn’t make the playoffs. Taking all this into account, there is quit a big chance the Avs will select Nico.

Nico Hischier was born in 1999 in Switzerland, where he spent the majority of his young career. He grew up playing in the EHC Visp youth system until 15, when his family moved to Bern in order to give him options to play in the top-tier junior and senior Swiss leagues. Since then, he played for SC Bern’s the U17 and U20, while also playing in the NLB, the second-tier Swiss league, while on loan back at Visp. He also played in the NLA, suiting up for 15 games and scoring a goal. Nico won both the U17 and U20 league title.

Nico's breakout year came during the 2016-17 season, when he opted to play for the QMJHL’s Halifax Mooseheads, the team that drafted him 6th overall during last year’s CHL Import Draft. Nico appeared in 57 games, collecting 86 points and being named the QMJHL Rookie of the Year, while also winning the Mike Bossy Trophy as the league’s best professional prospect. He was also named to the league’s All-Rookie Team after he led all rookies in goals, assists and points.

Internationally, Nico played at a number tournaments for his native country in various age categories. He was representing Switzerland at the U18 World Championship in Slovakia when this interview was conducted. He turned heads at this year’s World Juniors, where he scored four goals and registered three assists in just seven games.

Nico comes from a family of athletes – his father was a soccer player, his mother was swimmer and his brother Luca plays in the Swiss NLA, where they even got to play together for a couple of games a few years ago.

How do you feel with the draft being only a few weeks away?

Right now, I’m solely focusing on the tournament and me being a part of Team Switzerland. We want to have success here in Poprad (Slovakia), so I’m not looking too far ahead.

Did any NHL team contact you yet? Any unofficial interviews?

During the season, I had several meetings with some NHL teams, but there weren’t many of them. There weren’t any recent meetings, so I can fully concentrate on hockey right now.

Did you follow the 2016-17 NHL season? Do you know which teams are the prime candidates to select you at the draft?

Sure, I followed the season and I also follow the playoffs, so I know the standings. 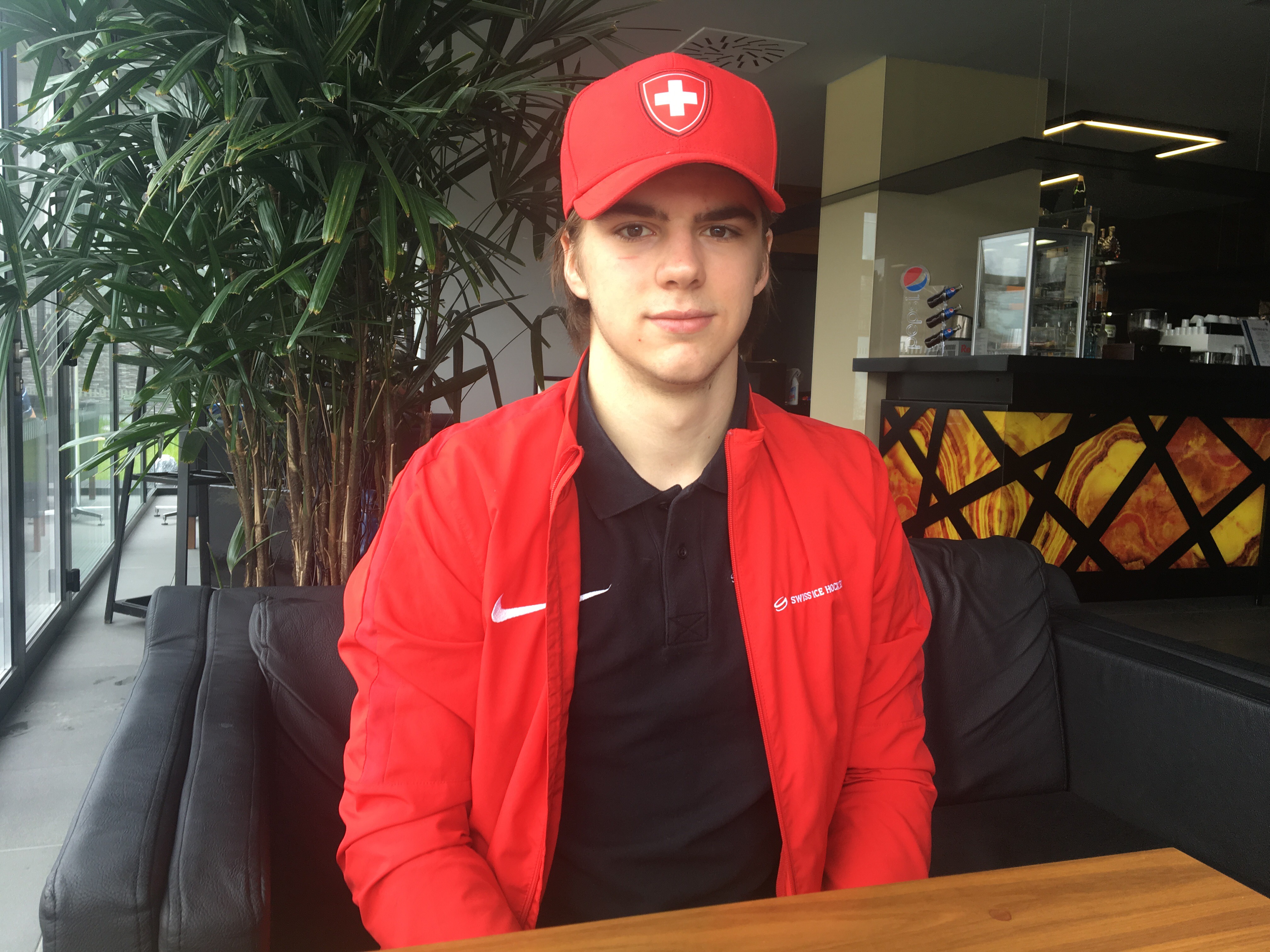 Are there any teams you would prefer to be drafted by?

No, I don’t think so. In the end, it all comes down to you being able to play in the NHL and I think I’m going to be happy anywhere I’ll go.

I’ve had a good season and I know that regardless of the position I’ll be drafted, I’ll be happy and take it as it comes.

Can you recall the moment you were told you could go so high in the draft?

I think it came after the World Juniors and I suppose it was the media in Montreal, who told me I could be a high pick. Nevertheless, I try to keep my focus on hockey – step on the ice, practice hard and try to have fun. That’s all that matters.

The Avalanche are one of the teams that could draft you. Do you know anything about the team?

Yeah, everyone knows about Joe Sakic, Forsberg and guys like that. I’ve heard that Denver’s a beautiful city and the mountains in Colorado are quite similar to those in Switzerland. I’ve only heard good things.

Have you talked with David Aebischer at some point in the past?

Can you tell us if the Avalanche contacted you during the season?

Do you think that you’re ready to play in the NHL as soon as next season?

That’s a tough question to answer right now, because the summer will be very important for me. I need to practice really hard during the summer and put on some weight. I could answer this question after the summer, but not right now.

So this summer will be more special like those in the past?

I also focused on putting on weight las summer, as I’m always looking to get stronger, so there will be certain similarities.

If you won’t make the NHL next season, would you play in the AHL or go back to Switzerland?

That’s tough to say. I’ll have to wait until after the draft and see what the team that drafts me think would be best for my development.

You’re under contract with SC Bern until 2019, right?

Yes, but it’s just a junior contract. It’s not a professional contract.

What are you planning to do after this tournament and until the draft?

I don’t know, because I’ll have to talk to my agent after the tournament. We’ll figure it out from there.

Will you play at the senior World Championship?

Could you describe your style of play? What are your strengths and what aspects of your game would you like to improve?

I think my strengths are that I can read the play really well, make plays and find ways to get out of tough spots. I would like to get tougher in front of the net or in the corners. I’d like to be stronger and put on some weight.

Why did you decide to go to Canada and play in the QMJHL last year?

It was a tough decision, but in the end, I thought that this would be the best way for me to become a better hockey player. I’ve always wanted to come to Canada somewhere in the back of my head, because I wanted to see how it is to play 68 games a season, with all the travel and the lifestyle in Canada. Then I got the opportunity to go there and I’ve said to myself that if I wouldn’t do it now, I’d regret it later.

What advice would you give young players from Europe who are considering going to Canada?

You have to clear up your heart and your mind in order to make a final decision. Your parents and those close to you can help you, but ultimately it’s your choice. Don’t let anyone else decide for you. You have to decide if this is the right thing to do for you personally, because I can’t say if it’s the right or wrong choice, as you can still play in Europe and go to North America later. There’s no real right or wrong here, it’s just a matter of choice. So my advice would be that you’ll need to listen to yourself and do what you feel is best for you.

What was the biggest difference between the Major Juniors and the Swiss pro league?

You can’t really compare it. The Swiss pro league is surely on a higher level, but that’s normal since its professional hockey and you’re playing against grown men.

What’s the reason you’ve had so many points during the 2016-17 season? Did you change anything in your game?

No, I think it was because I tried to have fun while playing. I’m at my best when I’m having fun. My teammates helped me a lot, as I’ve had really great teammates. When things weren’t going so well, both my coaches and my teammates told me to just pull through and that really helped me. They also really helped me to improve and adapt my game after I came over for which I am very grateful.

Why did you choose hockey over soccer when you were a kid?

It wasn’t really hard, because I’ve just had more fun playing hockey. It was a pretty easy decision.

When did you start playing hockey?

I first stepped on the ice when I was 3 years old.

You’re from a family of athletes. Did you ever feel any pressure from your parents or siblings?

No, never. My family always supported every decision I made. I know that they’ll always have my back. Not every child gets to have a family like this, which is why I’m so thankful for them and their support.

Who introduced you to hockey?

My brother. He’s always been my idol and I’ve always tried to do what he did. When he decided to play hockey, I was like ‘I want to play as well.’

It was like a childhood dream come true. I always wanted to play hockey with my brother. It was fun, but you have to keep being focused during games, so I didn’t really think about it while we played. Nonetheless, it was fun to be on the same team with him.

What was your favorite team and player while growing up?

One more question about next season. You still don’t know if you could play in the QMJHL next year?

No, I don’t. Everything is still open.

You won the Mike Bossy Trophy as the QMJHL’s best professional prospect. Why do you think you were selected for this award?

I think the league based its decision on my overall performance during the season and on how they see me playing next season, either in the juniors or in the pros.