Back in time: Eurolanche Invasion IX

Marko Keipi was the first ever Avalanche fan from Finland who participated in the Eurolanche Invasion project. He saw a total seven games in three different cit

The Eurolanche Invasion IX group met at the Vienna airport in Austria. The participants came by bus, car or train. We had people coming from all over Europe – the Czech Republic, Hungary, Finland, and Slovakia. After the long flight to Denver, we had to quickly get the rental car, because we were supposed to watch the Colorado Avalanche play their evening game against the Anaheim Ducks. It was amazing an experience to be in the Pepsi Center. It’s been a dream of mine for as long as I can think, so it was a very special moment. When you realize you’re making one of your childhood dreams come true, it’s truly special. The game itself was interesting, but Colorado ended up losing, like all the games on this trip (seven games), but this wasn’t the point of the trip. Even though we lost those games, it was mostly about the atmosphere and enjoying the trip. I think the trip was much more than just the hockey games, though. We saw the local culture, visited different cities and so on. It was an experience of the US, not just a hockey trip. We were able to visit a couple of other cities during one trip – Los Angeles, San Francisco and Tijuana, which was very exciting as well.

In the mornings, we would usually drive down to the Avalanche practice facilities to see their practice. It was a great experience to see how NHL players practice and it was interesting to see how they were working on their game. After the practices, we would wait outside the practice facilities for the players to come out. Some of them were super friendly, like Soderberg, Iginla and Sakic. It was great to see Sakic in person. Sakic was a class act and seeing him was one of the best moments of the trip. Its truly special to meet your childhood idol. At the same time, when you meet these childhood idols, you realize they are normal people.

One thing you will find out about Denver right away is that the people are super friendly. If you are coming from Europe, you can’t understand how friendly the locals are and they will apologize for everything. Good, chill people who are happy with their lives. People are very down-to-earth as well, but they are still curious about foreigners and were curious what we were doing there. They were amazed we came from Europe to only watch hockey. In Denver, everyone knows the Colorado Avalanche, but they will apologize for them being so bad at the moment, but that’s just the way it is right now.

The Author of this story is Marko Keipi, who is pictured with a Finnish in Tijuana, Mexico.

We did some sightseeing in Denver as well. We went to see the Red Rocks Amphitheater and it was truly breathtaking. The best moment was when the boys decided to have a competition to see who would be the first to make it to the top from the bottom. It made for great video and it was funny to see four guys running up the stairs. We also did a trip to the Rocky Mountains, which was bloody great! We saw the beautiful mountains and the amazing nature they have there, just half an hour from downtown Denver. It’s an amazing city. You can go from downtown to mountains in half an hour, but the mountains kept going on and David had to drive the whole day to get through most of the Rocky Mountains. It’s a series of never ending mountains. I’m from Finland and I have never seen anything like that, as we barely have any mountains. I loved the mountains and the fresh air.

After a couple of days in Denver and more hockey games, our plan was to go to Los Angeles and San Francisco. We took a flight to Los Angeles and rented a car so that we could go to our hostel. Los Angeles is a HUGE city. I never knew it was that big. You would have to drive an hour to get out of LA from the other side. It’s just massive! The best moment in LA was, for a fan of movies, definitely seeing this Hollywood sign from up close and taking a couple pictures.

We picked up one local guy and Eurolanche friend from LA for a quick drive to Tijuana just over the Mexican borders. By the way, I was surprised how many people knew Eurolanche and so on. So many people were curious what our group was and so on and many people even followed Eurolanche on social media. But back to Tijauana, where we only had a couple of hours to spend. We still had enough time to buy local tequila, some coronas and burritos. There certainly was a difference between the US side of the border and Mexican side. 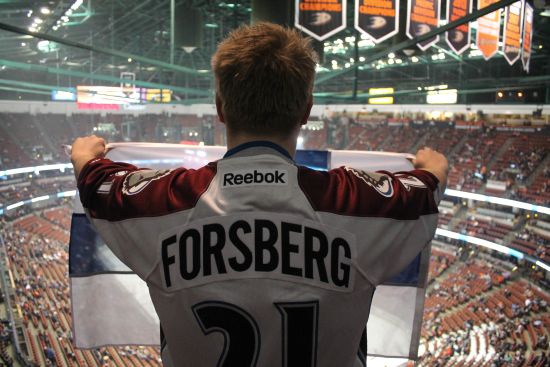 The hockey game in Anaheim followed after our Mexico trip and it was one of the most memorable games I have ever been to. Our group made a huge noise and we kept the “GO AVS GO” chants going through the entire game. We were intense and at the end of the game, we had many other people joining our group, so they could chant  “GO AVS GO.” We lost the game, but we had a lot of fun. I think it sums up the trip anyway. Losing sucks and all, but why not enjoy the moment anyway.

After the Anaheim game, it was time to leave LA. We were ready to move on to San Francisco to watch the Sharks game and check out Alcatraz and the Golden Gate Bridge. Overall, it’s a very beautiful city and I wouldn’t mind spending a couple more days in there to check out the whole city, same as LA. It would take some time to check ou the whole city. We only spent one day there.

The hockey game was waiting for us, so we had to leave San Francisco to go to the Sharks arena in San Jose. Our fan group was very excited about this game as well and we made a lot of noise, which made the home team fans, as well as the security guards a little bit uncomfortable. It’s not like we did anything wrong, we were just loud and It seemed to bother some people during the first period, but after the game, they said they wanted to take a picture with us and they gave us hugs after the game ended.

After the West Coast trip, we mostly saw games in Denver and I was starting to get a little exhausted from all the trips. I spent the last few days mostly hanging out, because my friend flew from Kansas to see me in Denver, which was awesome.

When we arrived back to at the airport Vienna after our trip, I was deadtired and ready to go home, but it wasn’t because I didn’t enjoy the trip! We did so many things and enjoyed so much in two weeks, that we had no energy left. I highly recommend the Eurolanche Invasion to any Colorado Avalanche fan, because you will remember it forever and I think It was the best trip I ever took. My dreams came true and I still can’t believe it!

Back in time: Invasion VIII