Norbert Gruber from Austria remembers his first trip to Denver that was followed by his participation on the event in the future.

After the first Invasion in December 2008 and January 2009 with three members, Eurolanche Invasion II was organized again with three members in the end of January, and then again in the beginning of February of 2009. Both Invasions were a huge dream come true for six different members. I was apart of the second group going to Denver in January - and it was a trip that I will never forget. Everything started with a game against the Anaheim Ducks. Although the Avs were not really a successful team at the time, everyone couldn't wait to finally see them live at the Pepsi Center. It was a very exciting game and the Avs had many chances to tie the game in the final minutes. Despite seeing the first loss live, we were still very excited because after the game, we were allowed to enter the backstage area thanks to the Eurolanche organization so we could finally meet the players personally for some signatures and photos. I will definitely remember the first players: John-Michael Liles, and Marek Svatos. Several other players followed and we were all feeling like we were in heaven. 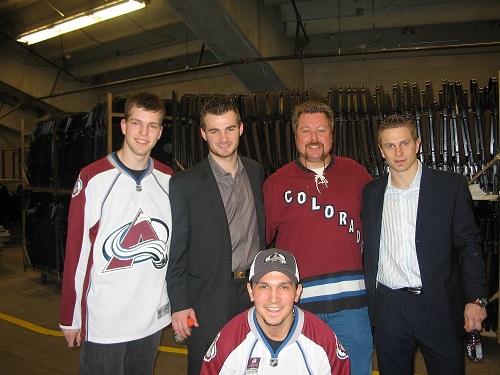 Author of this story Norbert Gruber (kneel on the photo)

The next day, we visited the Family Sports Center in Centennial to see the Avs practice. It was absolutely great to see the players preparing for their next game at home against the Calgary Flames. We also had a very nice time after watching training as we did some excessive shopping in the Pepsi Center store. Oh my god, that shop waiter must have thought that we were totally crazy! We had SO many bags completely full of Colorado Avalanche merchandise. 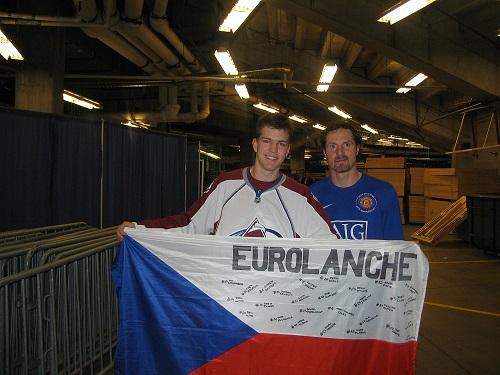 On the next day, we saw our second game against the Flames. After being a little bit disappointed by the loss the prior night, we finally saw the first live win. The Avs won the game 4-3. I will definitely remember the great performance by the Slovak goalie Peter Budaj. Furthermore, it was a very great game because we were sitting right behind the net in the first row, so we had a great view of the game, and the action on the ice was unbelievable. At the next Avalanche practice, players started to recognize our Eurolanche flag, and not only were we becoming more and more well known by the players, but also by the fans at Pepsi Center.

The third and last Avs game during Invasion II was again, a very special day. This time it was because of our visit to their game day practice. It was so awesome to see the players practice in the morning at Pepsi Center. Besides the 10-15 journalists, only we three Eurolanche members were in the seats. Because of the empty Pepsi Center, you could hear all the words, talks and discussions on the ice between the players and coaches so it was like being a part of their practice. After seeing the game day practice, and then the win in the evening (overall Invasion II record 1-2), I thought all of the best things were behind me at this point, but I was wrong - the best was yet to come…

Goalie Peter Budaj asked us if we wanted to see the Avalanche locker-room. He took us there, and we took a ton of pictures. This place is only for players and journalists, but travelling so many miles from Europe we surprisingly were invited and we could see all the things the other fans are usually not allowed to see. It was definitely and again, a moment I will remember forever.

After this week I was totally crazy for another Invasion. The next day after the Dallas Stars game I boarded the flight back home, and I already knew on the plane that I would soon come back again. All the other participants of the Invasion were feeling and saying the same. The suitcase full of merchandise, the camera full of photos with the Avs and I, the beautiful landscaping of Denver, Colorado and all the jerseys full of signatures from players - you cannot ask for more from a fan. With Eurolanche and the Invasion, I finally got to live a dream come true. I am thankful because not everyone gets these types of opportunities.