The Vice President of the Eurolanche Fan Club, Rudolf Sery from Slovakia remembers his first ever participation in the Invasion projects.

SLOVENSKÝ SUMÁR TU
I was ready to go to Denver when I saw the success of the first Eurolanche Invasion. Finally, I was able to make my first trip in the Eurolanche Invasion V. Due to the lock out; this Invasion was organized in March instead of December. Prior Invasions had months to make preparations - for this one, we only had a few weeks. 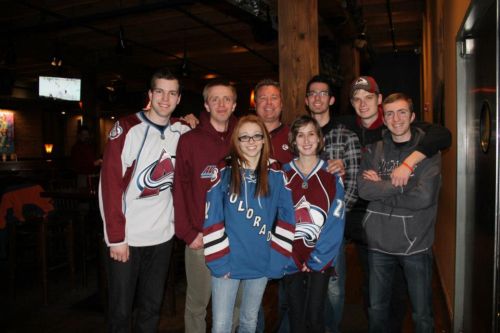 The Author of this story is Rudolf Sery, who is pictured second from left in this photo.

After no problems in our 18 hours of travel, we finally reached Denver. Our friend, Nick picked us up at the airport. The fifth Eurolanche Invasion in history had begun with a game between Colorado Avalanche and the Chicago Blackhawks on the very next day after arriving. I guessed the Blackhawks never ending winning streak would end in the previous game in Chicago, It didn´t happen. My hopes for the end of this home and home series was higher for the following game at Pepsi Center, and it came true when Avs beat the Blackhawks 6-2; there couldn’t be a better start to this Invasion. During one of the intermissions, the arena announcer interviewed all Invasion V members, which was recorded live and playing on the jumbotron at the same time. After the game, we met with all of the Avalanche players just like the previous Invasions. After the end of the following game vs. the San Jose Sharks, I would meet my Slovak native, Michal Handzus, and he even told me that he could see our Slovak flag during the game from the ice.

The next game, after a not so great performance against Edmonton, we drove 14 hours to St. Paul Minnesota. We went through Nebraska and Iowa to get there. We then spent one and half days in Minnesota, and besides the city center we would also visit the biggest mall in America – Mall of America. Unfortunately, Colorado lost to Minnesota at Xcel Energy Center 3-5. However, it was still a very historical first away game in Invasion history. Immediately after the game, we drove back to Denver and this time it only took 12 hours. In total, the Avs won only 3 of 7 games during this Eurolanche Invasion, which was the worst record for the Avs Invasion to date. 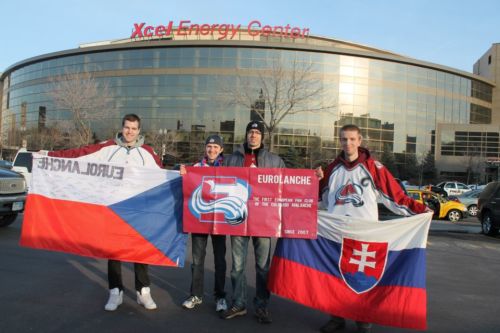 When hockey wasn’t on the schedule, we made several trips in, and outside Denver. We enjoyed the famous 16th Street Mall, where we always spent so much money. Other trips included Cave of the Winds, Pikes Peak Railway, Idaho Springs, and Red Rocks for a few examples. We also visited NBA games a few times. When I look back to our trip to Toronto, where we stayed before returning to Europe, it was very good - We got to spend three hours in the Hockey Hall of Fame.

It was my first trip, so I can´t say if it was better or worse than previous Invasions, but I believed so. It’s a good feeling that we have more and more friends each and every Invasion. Other key positive facts were trips to Minnesota and Toronto. Invasion V set a level of professionalism for our organization very high, and it will be hard to outdo it on our trips. If you are thinking about a future participation while reading this, I have advice for you – start to save money for the Invasion now, it is totally worth it.

Back in time: Eurolanche Invasion III